Spending Time With Save the Rhino Trust at Desert Rhino Camp

With Namibia’s famous black rhino bull “Don’t Worry” turning 30 recently, it is an honour to dedicate this post to the rhino guardians of the north-west, the Save the Rhino Trust.

In the early 1980s, prolonged drought and uncontrolled poaching took a heavy toll on the country’s desert-adapted wildlife, in particular the black rhino (Diceros bicornis bicornis). In 1982, Save the Rhino Trust was formed to reduce poaching and save this iconic mammal from the brink of extinction. Their approach was different. Instead of increasing costly security and monitoring practices, they provided the poachers a more secure livelihood – as wildlife guards! 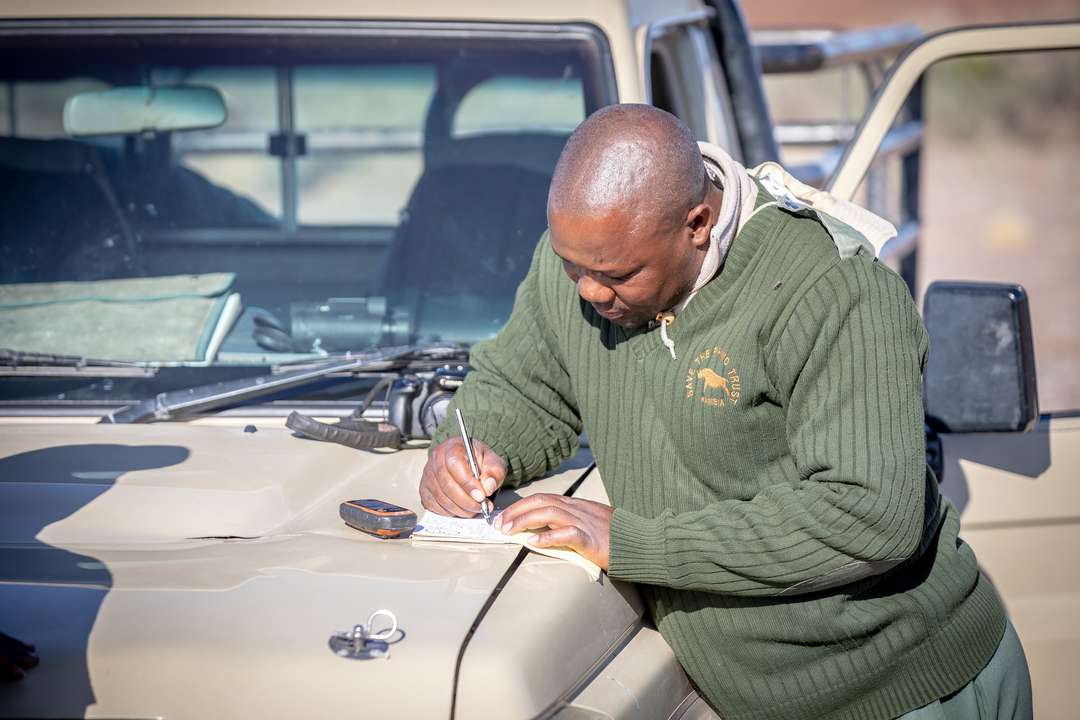 Community conservation in Namibia grew out of the recognition that wildlife has value, and that this value can be unlocked if local communities are empowered to manage and utilise these resources themselves. Under the Rhino Ranger Programme, people in the communities are trained to monitor and help protect the rhinos.

A local guide from Desert Rhino Camp, Bons Roman, summed it up perfectly: “It’s not just a job for me to support my family. It is also the huge difference nature makes to my community. It’s a pleasure for me to give and share my knowledge”. 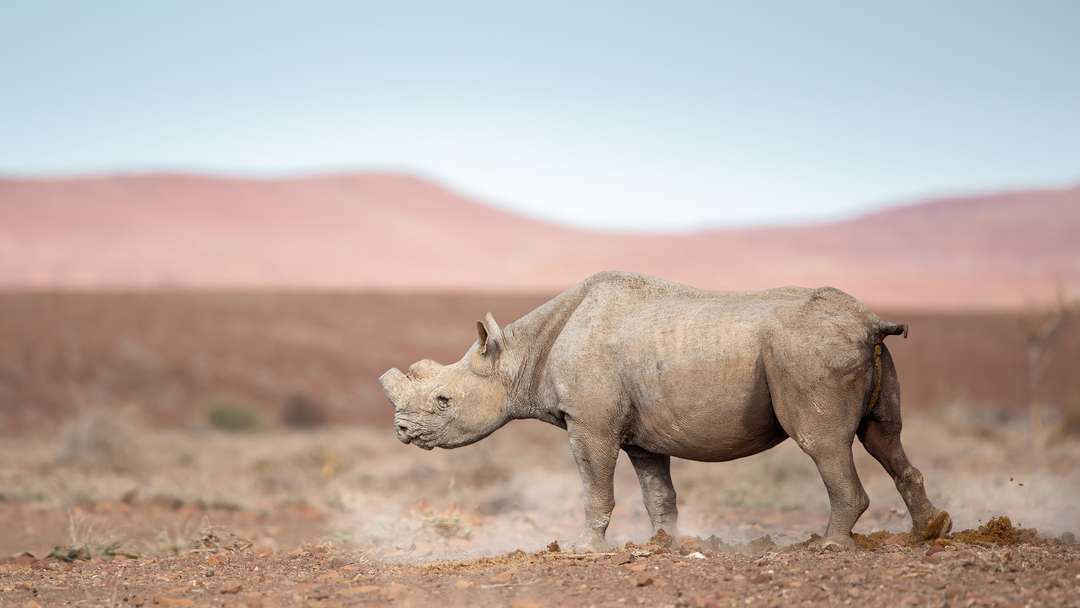 Desert Rhino Camp sits in the middle of a three-way partnership, bringing together the Save The Rhino Trust and the Tora, Sesfontein and Anabeb conservancies. It is an inspiring conservation success story, where your stay at Desert Rhino Camp not only supports the black rhino, but also the communities surrounding the camp. The communities in turn play their role in protecting the wildlife.

Desert Rhino Camp operates in an exclusive concession of around 140 000 hectares, but forms part of the 600 000-hectare Palmwag Concession. Combining the neighbouring conservancies, it forms part of an incredible 2.3-million-hectare wilderness area. That is larger than the Kruger NP, and about the size of Israel! 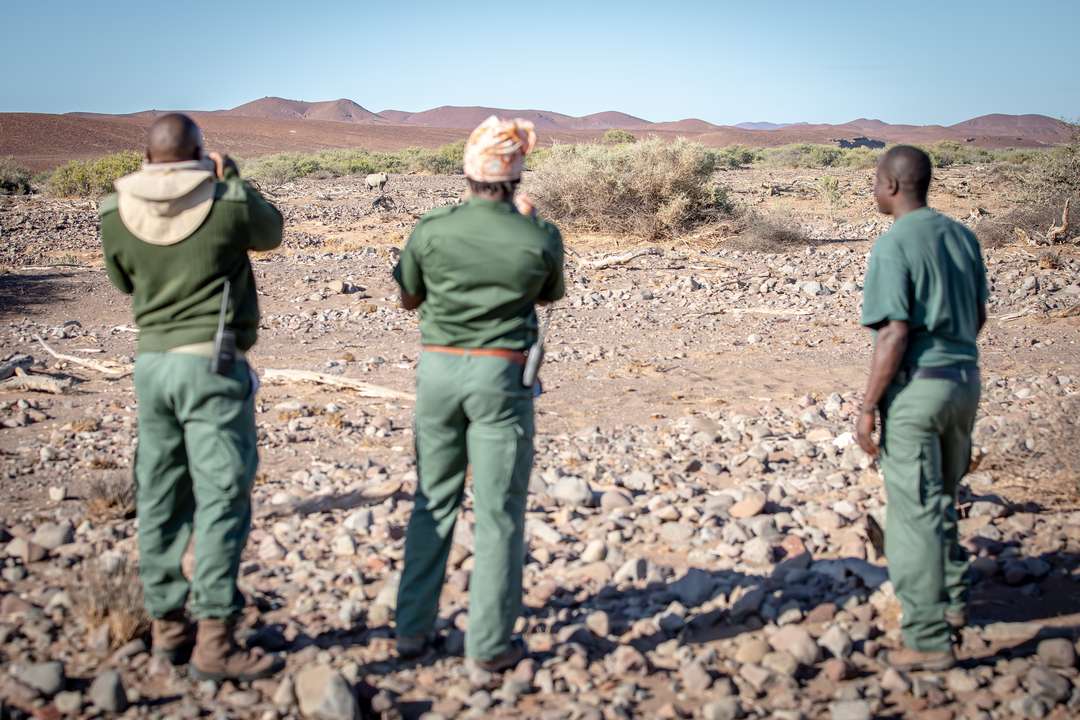 Your stay at Desert Rhino Camp is focused on tracking black rhino with the Save the Rhino Trust trackers. The concession is divided into four monitoring zones, and no more than two zones are covered per day. Black rhinos are highly sensitive, and rotating through the zones keeps disturbance to a minimum. While tracking and viewing the rhino, it is always done in such a way to minimise the impact on the animal.

On my first day we were allocated Zone 4, the furthest zone from camp. After a couple of hours tracking, we came across a beautiful black rhino cow called Top Notch (due to a notch in her left ear). She is a 26-year-old female who has had five calves since 2001, and it is suspected that she might have another calf soon! 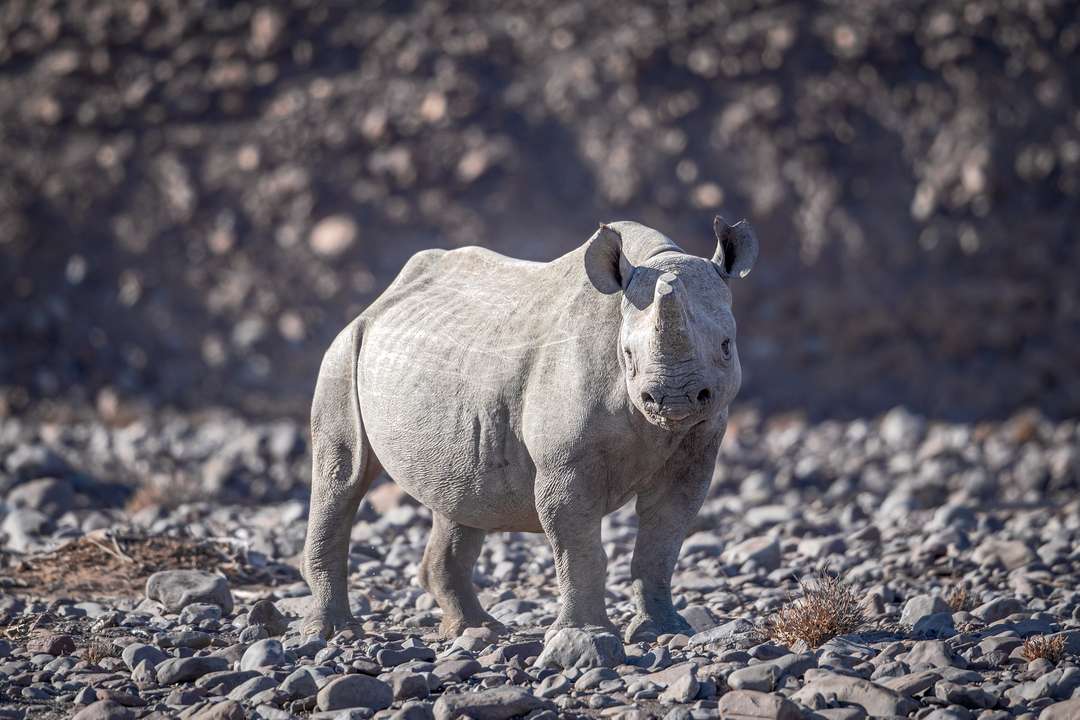 Because we were exploring the furthest zone from camp, we would not get back to camp in time for lunch. But no worries at all – the team had a lovely lunch set up for us out in the bush! There, the Save the Rhino Trust trackers gave us an informative talk on the different rhinos, their protocols and sharing their passion for the rhinos.

A “Road to Damascus” moment is one in which your perspective shifts completely, usually brought about by an event you will remember for the rest of your life. After lunch on the drive back to camp (we only arrived back in camp at 21h30… but more on that in a follow-up article!), I had such a moment while reflecting on the lunchtime discussions… 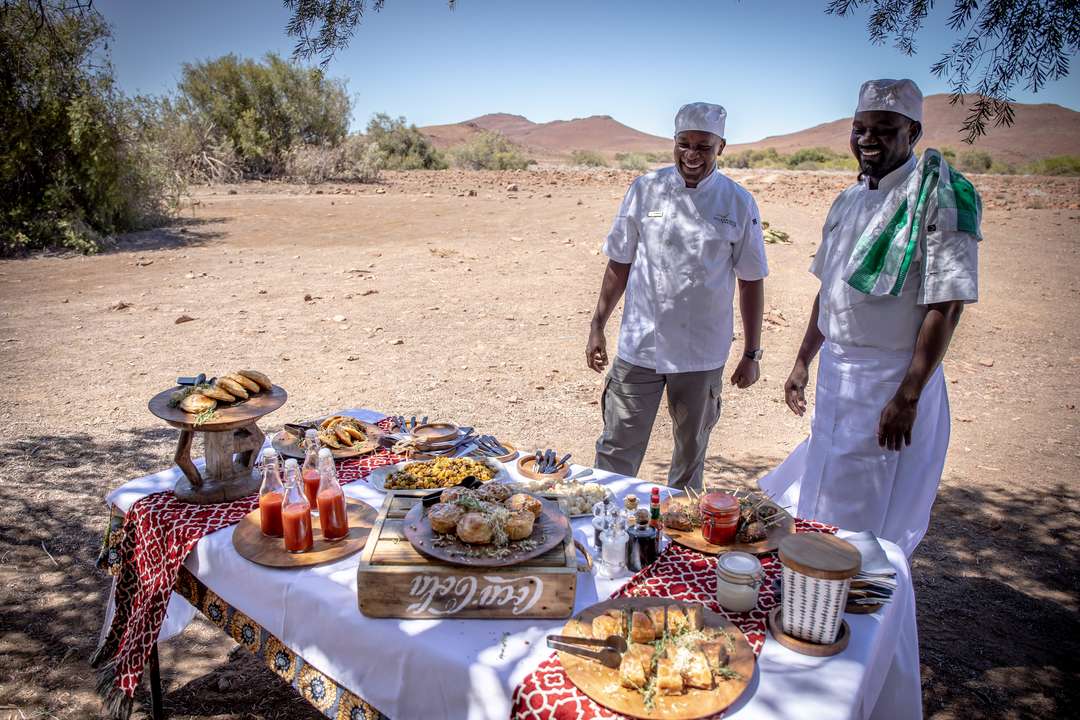 To think that it is estimated that there were around 100 000 black rhinos roaming Africa in the 1960s. Today there are fewer than 5 000. Yet, this region is home to the last truly wild population of any rhino species on the planet, and the largest to persist outside of national parks. Here, they are not bound by fences, and today, 100% of the rhino that live on community lands in the Kunene Region of Namibia are being protected by the community that lives alongside them! How enlightening is that. I find it absolutely incredible that a rhino population is flourishing despite the current drought and rampant poaching… and that in an area without fences… 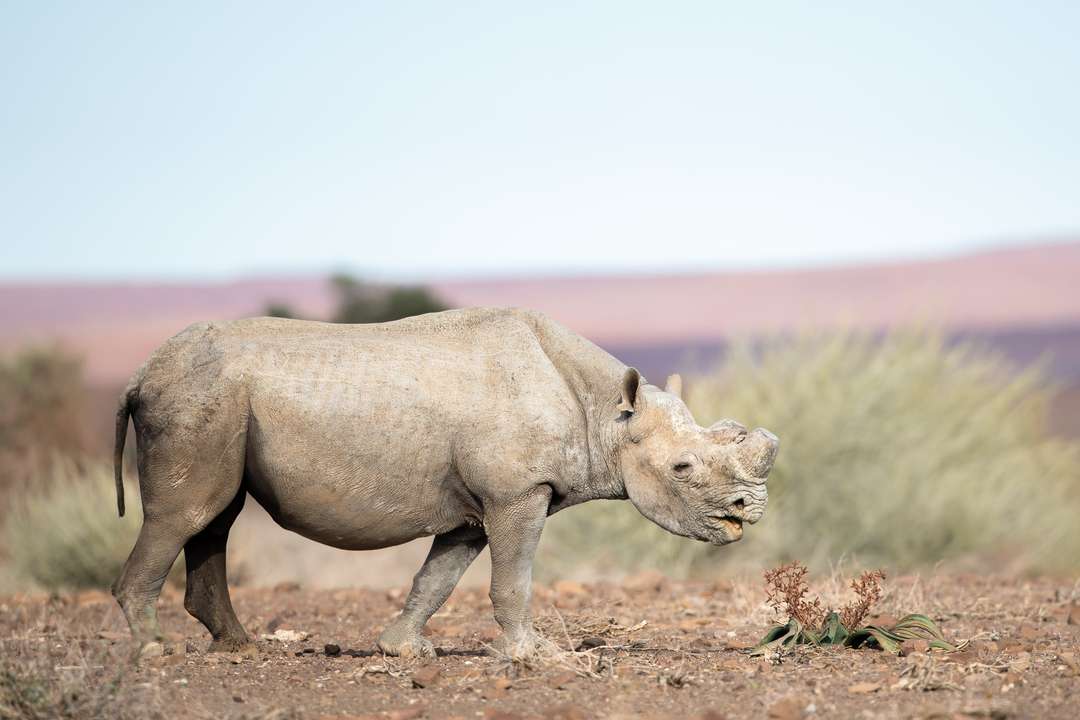 On my second morning we were allocated to Zone 1. I was thrilled to spend a morning with the famous bull known as “Don’t Worry”, who turned 30 recently. He is the only black rhino I have ever seen with a gentle soul. Black rhino are notoriously aggressive, but not this old gent… We spent close to an hour with him, and he was totally unaware of us as we remained downwind, with the south-easterly wind keeping us cool in the treeless environment and desert sun. 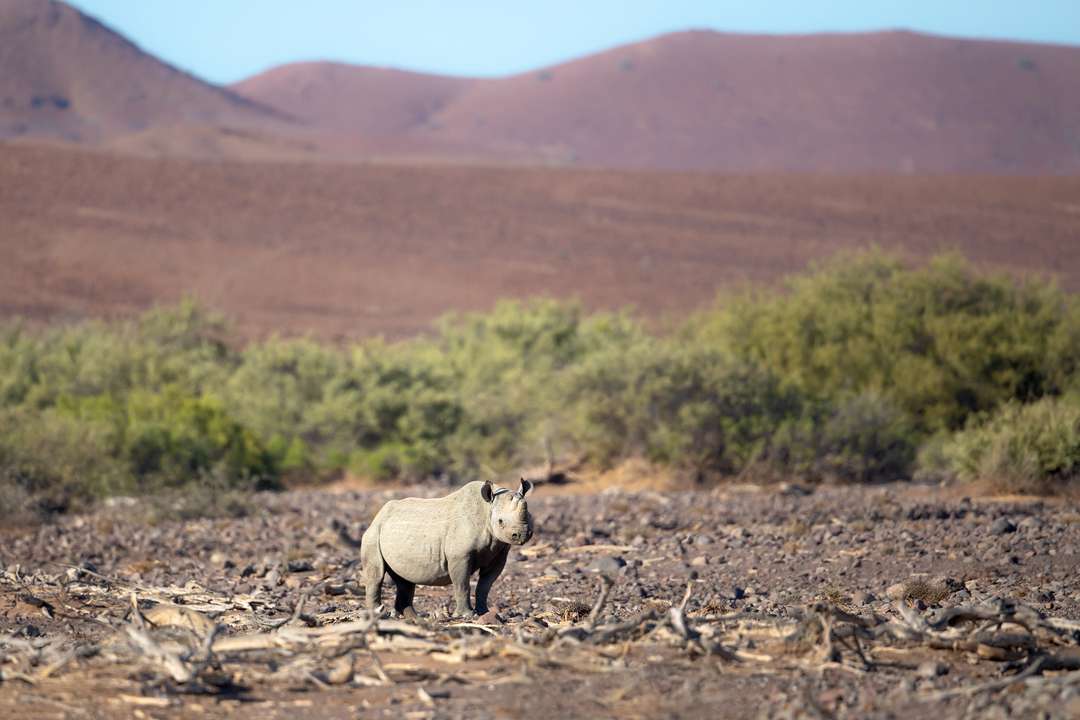 On a side note – this incredible area is not only about the rhinos. During my three-night stay we also came across a plethora of other wildlife including desert-adapted elephant, lion, giraffe, Hartmann’s mountain zebra, oryx and springbok, to name just a few.

By visiting Desert Rhino Camp, you don’t only make a difference to the conservation of desert-adapted black rhinos, but you contribute to the communities, which in turn are the guardians of the wildlife which calls the incredible Kunene Region of Namibia home. It was an absolute privilege to experience this magical area, and to learn how local communities, government and private business work together for the common goal of sustainable conservation. 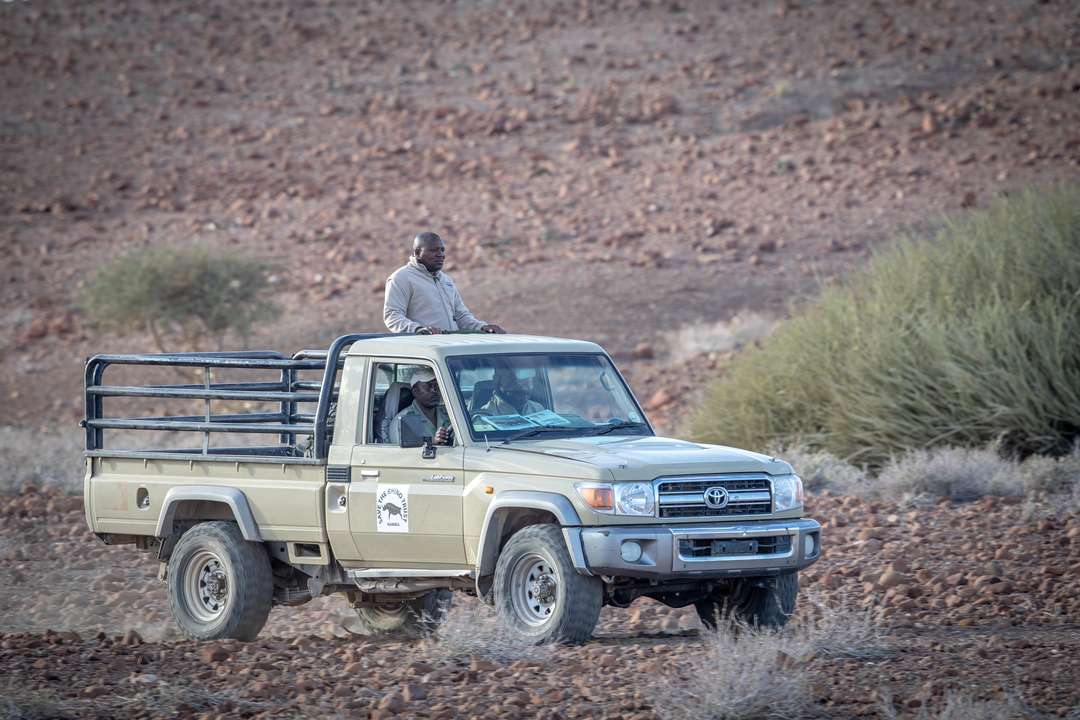 Written and photographed by Anton Kruger