By the time I had arrived on the scene, after being called in by the guides, much of the action had already happened. Three roaming lions had chased three disagreeing leopards up into a rain tree.

Two large male leopards resident in the Mombo area in Moremi Game Reserve had been courting one of our female leopards at the same time. As with most males of all species, we try to convince the lady of our prowess by beating all opponents into the ground. The leopards were no different, and their fighting had attracted the interest of the three lions. Of course, even though male leopards are quite large, they are no match for fully grown female lions. The leopards proceeded to race up the nearest tree where the fighting continued. 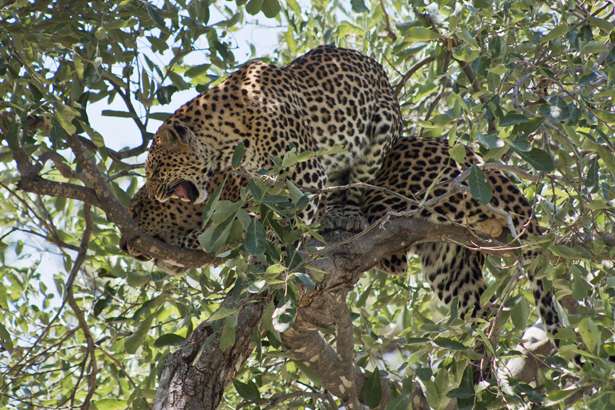 By the time I arrived, the lions had chosen a nearby tree to sleep under, while the three leopards had all but settled their differences. Blue Eyes, the one male, had lost the battle to Sargent, another large male leopard from the South. Pula had made her desired partner clear and proceeded to mate with Sargent, while Blue Eyes was forced to watch from a branch away. 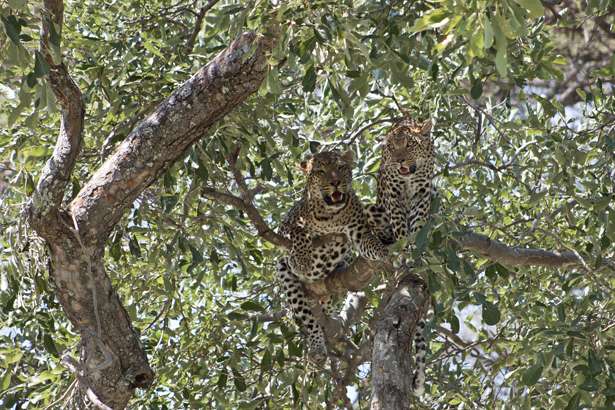 Blue Eyes was not quite finished and continued to try and fight while the two mating leopards were on a break. At one point Blue Eyes was almost thrown out of the tree, but saved himself with one strong foreleg that gripped a branch and allowed him climb back up. 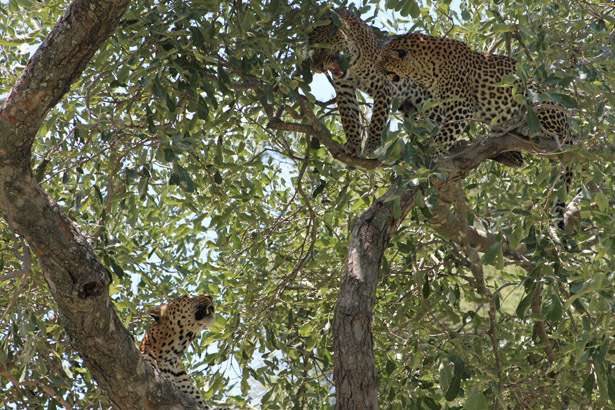 This mix of battle and mating continued for much of the morning. Eventually one by one the leopards braved the ground and moved off. First it was Sargent, followed by Pula and then by Blue Eyes. Though clearly defeated, Blue Eyes continued to follow Pula, perhaps trying to reclaim his former mate – and part of his territory…

Written and Photographed by Michael Fitt